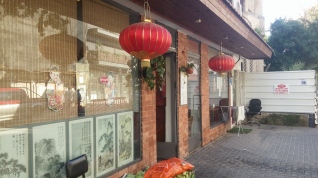 Lots and lots of people on social media have asked me and many of the foodies in my group, where does one get authentic Chinese food? As a kosher food eater, the options are quite limited. When I was growing up in Jerusalem, there was an amazing Chinese restaurant called Yosi Peking(for those of you who remember), and they were as close to authentic kosher Chinese food could find in Israel. Sadly, they shut down (please come back one day!) and my life went on without knowing that there was a hidden gem in Tel Aviv that serves authentic Chinese food! Once I heard about it, I had to go! 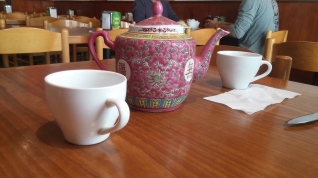 Welcome Hasinit (Kosher Rabbanute Tel Aviv) opened up in 1996 and has been run by the same Chinese family that immigrated to Tel Aviv ever since. The restaurant is located on a side street in the heart of Tel Aviv not far from the Central bus station, the restaurant doesn’t have a sign outside. Although, you can tell it’s a Chinese restaurant from a mile away!

I went there with my good friend Andrew, who is a foodie at heart and we both had no idea what to expect. We were greeted very 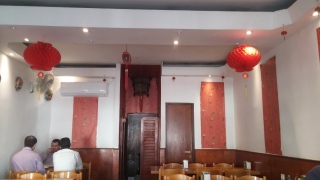 politely by the owner who was super nice, and brought us a hot-pot of Chinese tea. I’m not a big fan of tea, or a hot drink on a hot day, but the owner told us it was good for us so we had some of the tea and it was quite delightful. Then we looked at the menu and I have been craving wonton soup ever since Yosi Pekin had shut down, and there it was, the first thing on the menu! I was already so excited, but then it got better, the owner said that the wontons’ and the egg noodles in the soup were hand-made! Now I was ecstatic! 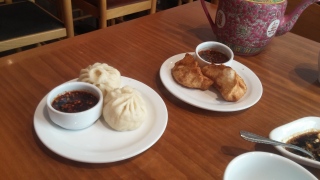 With the soup we ordered the business menu that comes with 2 types of dumplings and a main course, but the soup is all we really wanted.

can tell the difference. The steamed dim sum melted in our mouths it was so good. The soy and chili dipping sauce was a nice addition but the dim sum had enough flavor it didn’t need it.

Then we were served the soup. Let me tell you, the soup is definitely worth the trip, it’s massive, full of fresh ingredients and steaming hot! The broth is made in-house from chicken bones  the wontons are full of fresh chicken and melt in your mouth. The homemade noodles have great texture and add a ton to the soup. Then to 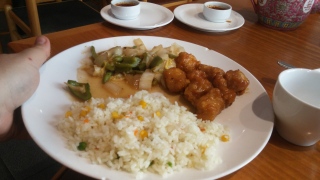 top it off they put in glass noodle, fresh coriander, carrots and sprouts for a nice crunchy texture. The perfect bite for a wonton soup. It brought back great childhood memories, let me tell you.

At this point we were practically full, but we had already ordered the main course with business lunch. The main course of the business lunch was ok, but there wasn’t anything special about it. The sweet and sour chicken was nice, as the stir fried vegetables and the rice, but it felt like cafeteria food. Next time I go, I order only off the menu.

I felt that everything that they make in-house is really delicious and worth trying, unlike the disappointing business lunch. If you find yourself in Tel Aviv and looking for a great kosher authentic Chinese restaurant, there is only one place to go and that’s the Choma Hasinit. 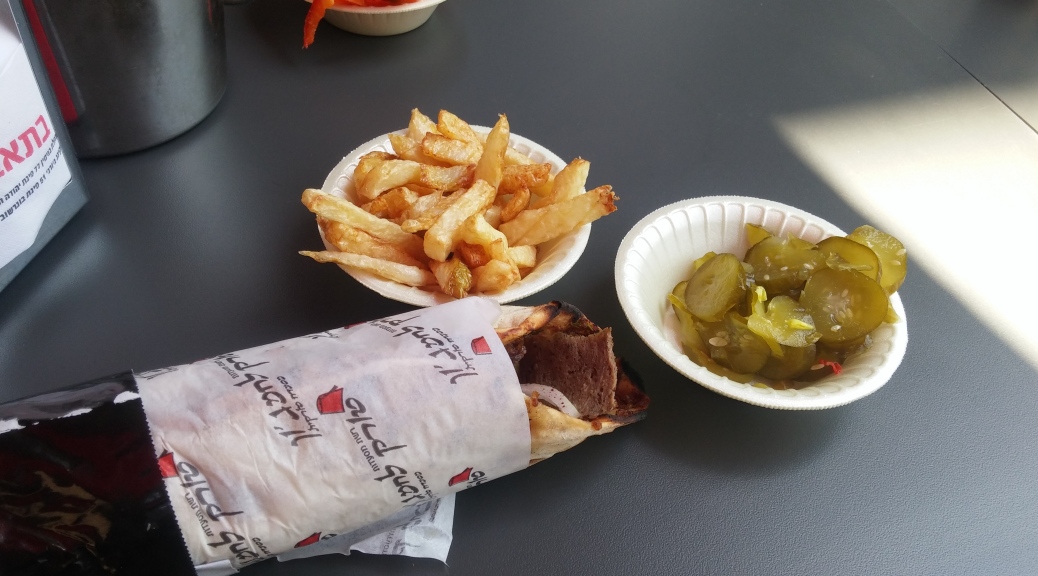 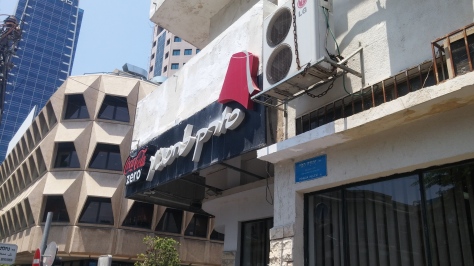 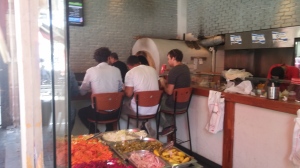 WOW, when I left, Turk Lachmaj’un I was impressed. I mean it’s known that the two most common street foods in Israel are falafel and shwarma, but the way they do things at Turk Lachmaj’un really take it to the next level. I want to thank my friend Mitch Schnieder for introducing me to this place because I KNOW I’m going to head back there.

Turk Lachmaj’un (Kosher Rabbanute Tel Aviv) has been around for a while, and their standards have stayed the same since day 1. For those 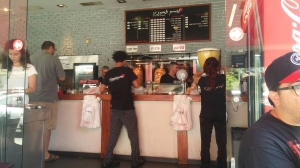 of you who don’t know what a lachmaj’un is, (here comes the culinary tidbit) it’s a loaf of bread baked with any type of meat inside. The dish hails from Turkey, and has become a very popular dish in restaurants around Israel. Traditionally it’s baked with lamb, but those who can’t afford it will use beef or any other meat they fancy. Traditionally it’s served with techina, but you can enjoy it with any dip you like.

Now to the restaurant. I call it a restaurant because it really  is. You have an option to either eat a shwarma to go and have them wrap up 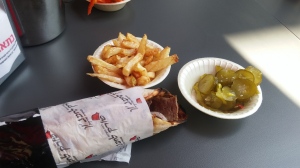 your meal in a laffa or lachmaj’un or to sit down and enjoy the full experience where they bring you salads to your table and you eat with a fork and knife. I chose the first option, and it was perfect! A little more about the restaurant, show up early or you will be waiting a long time to enjoy an amazing meal because the place is packed during the lunch rush. Most of the food is made in-house from the salads to the fries, I don’t know if the meat is prepared there but I know that each lachmaj’un is made in the stone oven that they hide in the corner. Now I need to break down the lacmaj’un process for you: They bake each lachmaj’un fresh to order. the lachmaj’un is prepared like this: they bake the meat and spices into and open-faced type of laffa bread and then when it comes out of the oven, they fill it with more meat!If you aren’t already drooling, here comes the fun part, I chose lamb all the way through, then he put in the fillings that were so fresh, from the techina dripping through, pickled onions, and I don’t even remember what else the guy put in, but it made it a perfect bite! The lamb was super moist and full of flavor and you can taste the lamb all the way through because it’s baked into the bread! The fries were a bit soggy because sadly Israelis don’t believe in a double fry french fry (pomme frites) but everything else was just perfect.

Turk Lachmaj’un is one of the best shwarmas I have had in Israel, definitely in my top 5 in Israel. So if you find yourself in the Nachalat Binyamin area of central Tel Aviv, come by foot, because there’s almost no parking and get on line for some of the best shwarma, Tel Aviv has to offer.