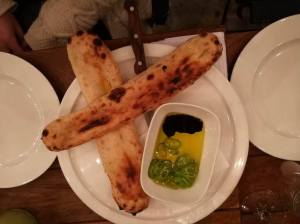 I was blessed with the opportunity to meet some amazing travel bloggers, through TBEX, that are hosting one of their conferences here in Israel during the month of  March. I was invited to

mingle with the group that have come for the first time to Israel, and get to know some of these amazing bloggers. I myself am more of a food blogger, but I do write about travel, mainly in Israel 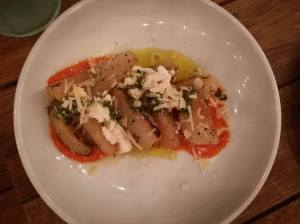 After the meet-up at
the Abraham Hostel we walked over to ANNA the new Italian restaurant in the Ticho House. We

were a group of 10 local and international bloggers, but the hostess wasn’t nervous at all.  I learned there, that what goes on in the kitchen is much more than cooking. The restaurant is home to kids from broken homes and by cooking they keep them out of trouble, and give them an amazing opportunity to learn from head chef Nimrod Norman. Chef Norman was a chef in the infamous Machne

Yehuda restaurant for many years and was the head chef at Yudaleh, which is the bar owned by Machne Yehuda. Before I sat down I was already excited.
Since we were a large group we were offered whatever the chef sent out, basically a taster menu. We started off with the house foccacia bread with a dip that had olive oil, balsamic 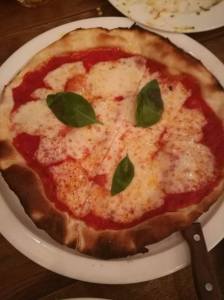 3 types of tomatoes, fresh mozzarella and a beautiful balsamic glaze that brought the whole dish together. The krudo was very interesting, but tasted great. The fish was cured nicely and the olive oil and tomato was a nice finishing touch. The salmon carpaccio was also a home run, had a purple hue meaning it was cured with beets and again with the olive oil, it was a perfect appetizer.  I almost forgot, they

also served us a baked kohlrabi dish with fresh mozzarella and a tomato sauce which was a nice and healthy starter!

The on came the main courses. Two types of pizza a margarita and a pizza Bianca, an endive salad and their homemade gnocchi. I think they thought they were feeding 100 people because they piled on the mains. The pizza margarita was probably the best pizza I have 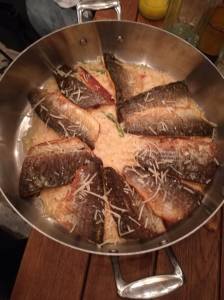 had in Israel. The thin crust, sauce to cheese ratio was perfect! The Bianca pizza was good, but not as good as the margarita.  I can’t say enough about the gnocchi. The Italians in the group said that the gnocchi in ANNA is better than in Italy, and it was amazing! The gnocchi were so light and fluffy, I could have sat there and just eaten 10 plates of the gnocchi! The endive salad was 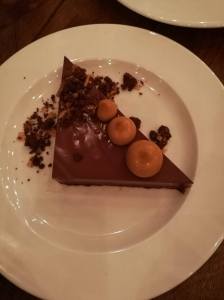 beautiful with the blue cheese and the vinaigrette, a perfect combo to make an amazing salad.  If we weren’t full by then, which we thought the meal was over, then came out a pot of sea bass on a bed of risotto(off the menu)! Are you kidding me?! It was some of the best fish I’ve had in a restaurant ever. The risotto was the same, super creamy with a crunch from asparagus and other 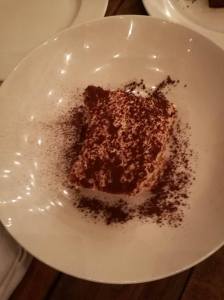 vegetables, I was ready to go into a food coma!!!

Then came dessert, we couldn’t believe it! They brought out 3 types of dessert and each one was just better than the other!  First was a classic Italian tiramisu. I’m not a coffee and rum guy, but it still tasted great, not too sweet and not overpowered by the coffee. Then was a sticky toffee pudding (Off the menu) covered in almonds and pistachio ice cream. If you have never had sticky toffee pudding before, it’s very impressive and very interesting. But the best out of all three was the chocolate cremeux. Layers of chocolate goodness topped with a dulce de leche cream, it was as I called it “death by chocolate” dessert. One of the best desserts I have ever tasted in a restaurant, period. 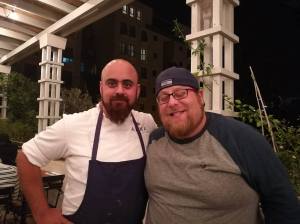 When we were barely finished the chef came out and got a standing ovation, because he really deserved it. He was also super nice and a mench too! The experience I had witnessed (and survived) at ANNA had been just amazing! I would even say it is one of the best kosher restaurants in Israel, hands down, definitely in my top five. I really enjoyed being a guest at ANNA and I will definitely go back and try new things off the menu!