For a long time there has not been a Mexican restaurant in Jerusalem. For those who remember, there was a place called Amigo’s on Yoel Moshe Salomon st. that closed down about 15 years ago. The reason it shut down was because the Israeli crowd is not familiar with the Mexican flavors or cuisine. Which is weird because, Sefardic cooking and Mexican cooking have almost identical flavor profiles. Coriander, cumin, chili peppers and so on. So it really doesn’t make sense why Mexican cuisine never caught on. I feel that the reason it never caught on is because back then, people where afraid to try different cuisines. Asian, Mexican and even American cuisines have only caught on in the past 10 years around Israel. The reason for this is because of TV shows, more people travelling the world and also a demand for something different. 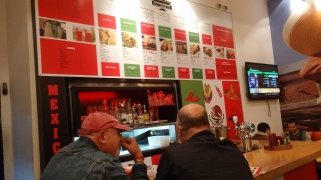 As you can imagine, I was very excited to hear that someone opened up a kosher Mexican restaurant in Jerusalem (I mean Mike’s place serves Mexican dishes, but it’s not a Mexican restaurant, or the Bodega in Efrat). I went to the Burrito King on a Thursday night with my good friend Mitch and went to Emek Refaim street where it’s located. Upon entering the place it really represents Mexico at it’s finest. The colors of the place are the colors of the flag and the menu is printed on the wall. I asked the manager what was good on the menu, and he ordered for us a chili con carne burrito, a chicken fajita, chili fries and the beer was half off so we also got two beers.

Sadly, the cook doesn’t understand how to cook Mexican food. There was no Mexican flavors in the food we ordered. The heat source of dishes came from black pepper and not jalapeno peppers, the chili tasted more like a bolognese sauce with beans and not like chili, and the fajita was just very messy, the burrito was mushy. A burrito is supposed to be like a shwarma, firm and able to hold not mushy. The flavors weren’t bad it just didn’t taste like Mexican food. The prices are reasonable and affordable, but if you are looking for an authentic Mexican meal, you’ll have to wait a little longer.

It’s such a shame because all they need to do is swap out a couple of ingredients, do a better presentation and they really can be on the path to success. 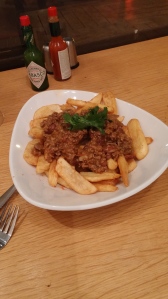 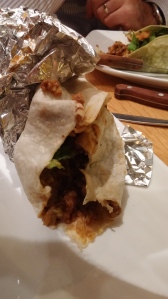 8 thoughts on “The Burrito King is not King”